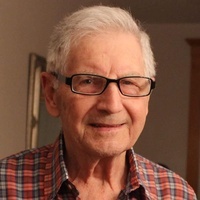 Walter Dockter, age 94, passed away Saturday, November 25, 2017.  He was born April 22, 1923 to John and Rosina Dockter of McLaughlin, SD.  Walter grew up on a farm and received his education in a country school.  He worked on his father’s farm until he was drafted into the Army.  Walter served in the European Theater of Operation during WWII.  After he was discharged, he returned home.  Walter met Irene Putnam and this courtship grew.  They were married and to this union, 3 children were born: Lyle, Neil, and Nyle.  Walter followed his father’s footsteps and became a carpenter.  He retired after several years of carpentry work and moved to Haysville, KS with his wife.  He was preceded in death by his parents; wife of 62 years, Irene; 4 brothers, Edwin, Gottlieb, Otto, and Adolph; and 2 sisters, Anna Dietrich and Frieda Bender.  Walter is survived by his sons, Lyle and wife Bobbie, Neil, and Nyle and wife Debra; and 5 grandchildren, Keith, Tara, Ciera, Brett, and Sophia.  Visitation: Friday, December 1, 2017 from 1 to 8 pm with family present between 5 and 7 pm at Reflection Pointe Funeral & Cremation Services, 3201 S. Webb Rd., Wichita, KS 67210.  Funeral: 10 am, Saturday, December 2, 2017 at Resurrection Lutheran Church, 3850 W. 71st St. S., Haysville, KS 67060.  Interment to follow at Greenwood Cemetery.  Memorial contributions may be made to your local veteran and family support program.

To order memorial trees or send flowers to the family in memory of Walter Dockter, please visit our flower store.