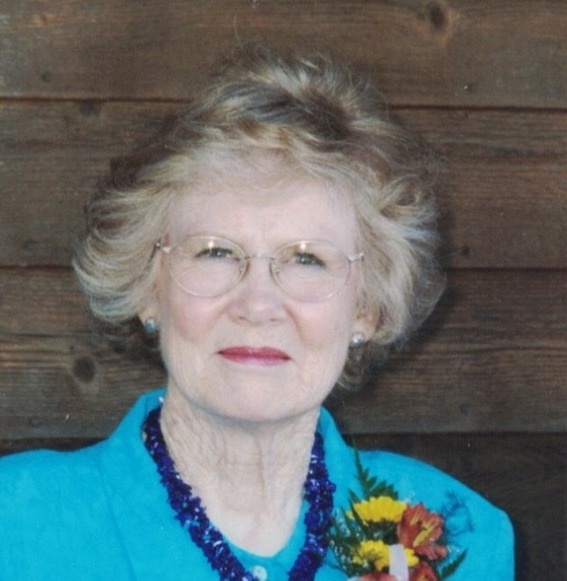 Velma realized God’s promise of everlasting life on Monday, June 20, 2022, while under hospice care at Regent Park Rehabilitation and Healthcare in Wichita, KS.

June was born June 20, 1926, one of five daughters to George T. and Fannie M. Moxham at the farm home in Republic County near Belleville, KS.  She received her primary schooling at a small one room rural school in Milner School District No. 68 and received her high school diploma from Belleville High School in 1944.

On March 19, 1945, she married Donald W. Baldwin at the Belleville Methodist Church.  Having received family blessings this young couple migrated west to Goodland, KS to start a family and build their future of fifty-three years together.

June accepted a bookkeeping position with the B.E. Bridges Company in 1946.  Over the next nine years she wore many titles as a housewife and working mother to three sons while supporting her husband’s career development in the construction industry.  To that end she moved her family four times to Dodge City, KS, Garden City, KS, Concordia, KS, and in 1959, back to Goodland making sharing many opportunities to join new communities, churches, and make new friends.  In 1960 she began receiving students into her home as a piano teacher over the next twenty years, impacting the musical education of several area children including her own grandchildren.  She loved her family and their many activities while working out of the home.  She enjoyed reading, sewing, quilting, painting, playing bridge, tending her flowers and accompanying her husband on his many business trips.  In 1969, having raised her family she decided to further support her husband’s growing businesses and returned to a bookkeeping position with Rhoads Construction, Inc. continuing in that capacity for the next 19 years.  June never lost her love of music, finding new ways to express that by being a faithful member of the First Christian Church.  She sang in the church choir and played the piano and the organ at church services while also serving as a deaconess and adult Sunday School teacher. June was the beneficiary of wonderful, fulfilling relationships in the Church and community hosting an adult Bible study, being a longtime participant of the Christian Women’s Fellowship, and a life member of the Order of Eastern Star.

Following her husband’s death in February of 1998 and twelve-year period of widowed life, June married Dean Stauffer of Boulder City, NV in 2010 until his death in 2018.

To order memorial trees or send flowers to the family in memory of Velma June (Moxham) Baldwin-Stauffer, please visit our flower store.