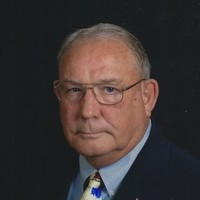 Terry joined the Maryland Army Reserves at 18 years of age. He attended the Officers Candidate School at Ft. Sill, OK and went on active duty at the beginning of the Cuban Crisis. Terry served in the Army for 34 years, serving 3 tours of duty in Vietnam, and six years in Germany. Most of his stateside duty was at Ft. Sill, OK teaching and writing Artillery tactics. He earned his Bachelors of Science from the Oklahoma College of Liberal Arts in Chickasha. He was Deputy Commander in ICO Hall. Terry attended the Artillery Basic Course, the Army Career Course and later the Command and General Staff College at Ft. Leavenworth, KS. He retired in 1989, while on active duty with the 89th ARCOM. Terry was an avid golfer and organized tournaments for the MOAA JROTC Scholarship. He was a member of the Kansas Honor Flight Volunteers.

To send a flower arrangement or to plant trees in memory of Terry Berk, please click here to visit our Sympathy Store.

To order memorial trees or send flowers to the family in memory of Terry Berk, please visit our flower store.