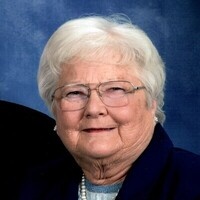 Olive was graduated from Lane County Community High School, Dighton, in 1950. She enrolled that fall at the University of Kansas, Lawrence, Kansas, the member of her family to attend a four-year university. She left after her sophomore year to marry Theil and they started a family together.

Olive never gave up on her goal of obtaining a college degree, however, and with three boys at home under the age of 10, was graduated with a bachelor of science from Sterling College, Sterling, Kansas, in January, 1965.

Olive volunteered for various organizations during her life, including a hospital volunteer at Wesley Medical Center in Wichita; chair of the United Way campaign in Kingman, Kansas in 1984; and service on the state board for the Kansas Medical Auxiliary.

Olive and Theil were founding members in 1995 of the South Central Kansas Community Foundation, Pratt. She was the recipient of the foundation’s initial Outstanding Service Award, an annual award also named in her honor. They also supported the Pratt Regional Medical Center Foundation and together they were active participants in Sunday school classes.

To order memorial trees or send flowers to the family in memory of Olive Zoe Bloom, please visit our flower store.