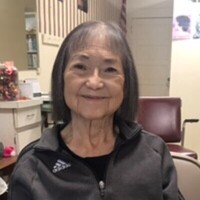 Maria Christina Roman Garcia, of South San Francisco, passed away May 13, 2021 at the age of 79.  She was born April 7, 1943 in the Philippines as the only child of Federico Delfin Garcia and Rosario Rivera Roman.  While in the Philippines she earned her Bachelor of Business Administration from the University of East Manilla Philippines.  She moved to the United States in March of 1973 with her three young boys. She raised her boys in Kansas while working as a sheet metal mechanic at Gates Learjet and a Manufacturing Engineer at Boeing. She later relocated to California in 1988 and worked as a Manufacturing Engineer Planner at Northrop Corporation and eventually a recruiter/networker, customer service agent, and duty officer for Prime Flight for the past 20 yrs. Her career in the aircraft industry spans almost 40 years.  Christina is known to her many friends and co-workers as Chrissy, Christy or mommy. She enjoyed traveling, shopping, and she loved to work.  She was a big fan of the Golden State Warriors, SF 49er’s, & SF Giants.

Christy spent most of her life helping people.  She wanted to see others succeed through hard work.  If she thought you needed help, Mommy would be the first on to lend a hand.  She has helped many people in many ways.  Finding them a place to lay their heads at night, clothes to keep them warm, and with one of her many talents, finding them a job so that they could pursue the American Dream as she did.  Christy has gained many sons, daughters, friends and co-workers wherever she called home throughout her prosperous life.

She was preceded in death by her parents, her son Crizarlo Delfin Garcia (4/14/2021), half siblings on her mother’s side Wilhelmina Nazaiena, Ededina Pascua, Marco Polo Enriquez, & Prencesita Schulte and on her father’s side Federico Garcia Jr.

To order memorial trees or send flowers to the family in memory of Maria Christina Roman Garcia, please visit our flower store.