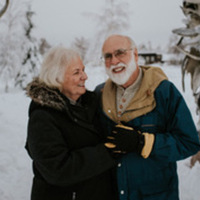 John Donald Moody went to be with our Lord and Savior, Jesus Christ in the early morning hours of Dec. 27, 2021.

John was born Dec. 16, 1938 in Wichita, KS to Martin and Hazel (Schooling) Moody. John was a graduate of Wichita East High School and a veteran of the US Navy. John graduated from Wichita State University with a BS in Mechanical Engineering and later an MBA in 1966. Eventually John went on to own his own commercial engineering firm, Moody Engineering, Inc.

John married the love of his life, Suzanne Ganzer on April 6, 1963. A few years later David came along after that Debby was added to the family.

John was an avid and accomplished amateur photographer, an active member of the Wichita camera club. John had his camera with him pretty much wherever he went, documenting this or that event at church, mission trips, family events, vacations- or taking trips on his motorcycle simply to take pictures. John participated in numerous short term mission trips- engineering projects several times to Sub-Saharan Africa, disaster relief in Pakistan and Haiti. He got into trouble in the Middle East and in the former Soviet Union when he was taking pictures of border crossings, trains, military checkpoints and bases… unable to figure out why anyone would have a problem with him taking pictures of these things!

John loved his church Eastminster Presbyterian - over the years he was an active elder, the Chair of the World Mission committee, he was on several pastoral nominating committees, and other task forces at church. He and Suzanne would often host missionaries in their home for extended times.

Although John was an introvert- and most comfortable behind the camera in crowds- he did enjoy people, as many can attest. For decades he with a small group of men- for prayer and study, and in the process forming deep and life long friendships. John was intentional about his following of Christ, whether in public or private- he was the same person, desiring above all else to be faithful to his Lord and Savior. John will be sorely missed by many friends, and family members.

John is preceded in death by his beloved wife of 57 yrs, Suzanne, his parents Martin and Hazel, his sister Helen and his brother Bob.

In lieu of flowers, the family asks that memorials be given in John’s name to the World Outreach committee of Eastminster Presbyterian Church, in Wichita, KS and the Union Rescue Mission of Wichita, KS.

There will be a brief graveside service Monday, January 17 at 1.30 pm at White Chapel Cemetery, 1806 N. Oliver, Wichita KS. All are welcome.

Following the interment there will be a memorial service at Eastminster Presbyterian Church, 1958 N. Webb Rd, Wichita at 3pm, with light reception to follow.

To order memorial trees or send flowers to the family in memory of John Donald Moody, please visit our flower store.