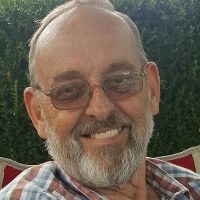 James “Jim” Richard Stoffle, 76, passed away Saturday June 1, 2019. He was born February 20, 1943 to N. Neal and Helen Dorothy (Grinde) in Chicago, Illinois. He was preceded in death by both parents, brother Tom, and granddaughter Emma. Jim is survived by his wife Mary Jane (Jani); children: Julie (Jordan) Hatch, Donna (Garry) Jordan, Jeff (Helen) Cartwright, Matt (Pam) Cartwright, Stephanie Read, Jennifer Stoffle, Amy Stoffle and sister Elaine (Lloyd) Hanna; 13 grandchildren and 10 great grandchildren. Jim graduated from Wichita State University after spending 4 years in the US Air Force. Jim was a serial entrepreneur owning several small businesses. As the Marine Marketing manager for Coleman Company he was instrumental in the development of the vacuum formed canoe for the company. Jim retired as CEO from Great American Incentives and he and his wife Jani became snowbirds spending their winters in Punta Gorda, Florida. Jim loved playing Pickleball, outdoor activities, photography, traveling the world with old and new friends and playing bridge with the intent to win. Jim loved finding new investments, networking to connect those in the community or creating home construction projects. Jim was a valued mentor to his family and friends with an emphasis on the enjoyment of hard work. Jim was a past president of the Wichita Manufacturers Association, and a past active member of the Promotional Products Association International.

A special thank you to the Dole VA hospital, spinal cord clinic and hospice unit for all that they did for Jim during his short illness as well as Mark at the Paralyzed Veterans of America

In lieu of flowers, memorial contributions may be made to the

Memorial service will be held in late July.

To order memorial trees or send flowers to the family in memory of James Richard Stoffle, please visit our flower store.