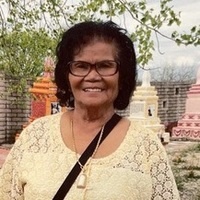 Boonkruer “Kua” Dickson was born in Pakthongchai, Thailand October 9, 1936. She passed peacefully in her home surrounded by loved ones on Monday, February 28th, 2022. She grew up in Pakthongchai and contributed to her family's silk business. She later began a catering service. She met her husband of 51 years in Thailand and moved to the United States where they were married in 1971 in Temple, TX. Then raised a family in Stafford, KS. She worked for many years at Leisure Homestead in Stafford as a CNA. She continued catering her delicious food and selling her many canned goods and vegetables from her incredible garden at local farmers markets. She will always be known for her infectious laugh, warm smile, and spicy personality.

To order memorial trees or send flowers to the family in memory of Boonkruer "Kua" Dickson, please visit our flower store.