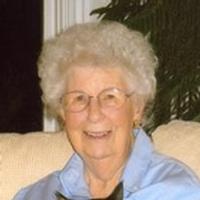 Elaine was born October 24, 1918, to Pete and Ivah (Michael) Wedman, as their first-born, on the family farm near Anthony, in Harper County, Kansas. She grew to adulthood on that farm. She was later joined by two siblings, E. E, .in 1922 and Virginia in 1924.
Elaine was especially close to her Wedman grandparents, Peter Sr. and Susan Wedman, who lived on the adjoining farm. She loved sharing wonderful experiences and stories of her childhood and young adulthood with her family, regarding that special relationship with them.
Elaine was baptized in the Christian Church early in life. She has lived in Wichita since 1945. She married V. Russel Lockwood on March 22, 1947. They joined the Woodlawn Christian Church in Wichita in 1961. This church moved to South Rock Road and became known as Countryside Christian Church. Sybil and Charles Fox, and Elaine, started the door greeting in 1988. This was a duty she especially enjoyed and missed being there very few times in all those years. She looked forward to greeting each one every Sunday, until her retirement from that duty in 2008.
Russ went on several missionary building trips to different countries. Elaine accompanied Russ on one of those missionary building trips to Tokyo, Japan, to build a church. Eighteen other people went on this particular missionary trip for twenty-one days. Elaine and another lady did the cooking and laundry for all the other workers, who were building the church. On the return trip to the United States, Russ and Elaine stopped off in Hong Kong, China, for two days to celebrate their wedding anniversary.
Before Russ passed away in 1988, they enjoyed traveling to many different countries. That list includes several times to Great Britain, also Wales, France, Germany, Austria, Switzerland, the Netherlands, Australia, New Zealand and in the South Pacific, enjoying Fiji and American Samoa. Because part of her heritage includes Scotch – Irish descent, Elaine particularly enjoyed a trip to Ireland and Scotland with her sister Virginia. They traveled in forty-nine states, but never made it to Alaska.
Elaine was a devoted daughter, sister, mother, aunt, grandmother, great-grandmother and great-great-grandmother. Her list of friends, from all walks in life, is long. Among her special interests and passions were learning, people, nature, the U. S. space program, traveling, music and oil painting.
She always told her family that she knew she could paint, but never found the time to pursue painting until she was seventy-five years old. Once she had created her first painting, she was truly hooked. Over one hundred paintings were accomplished in fifteen years. Without a doubt, she did possess a God-given talent and her paintings ran the gamut from still-lifes to large encompassing outdoor scenes. Not many people can lay claim to doing portraits of their daughters as Elaine did.
Her large family is so proud of her talent and have many paintings each, to enjoy. Not one of her paintings was ever sold, even though they were worthy of a considerable price tag. She only gave them away to friends and family, with much love. Elaine was always so modest about her talent, feeling it was nothing special, but any one of her family will argue that point.
Elaine always believed everyone should participate in some civic duty and one of those civic duties that she enjoyed, was serving on election boards for over forty years in Wichita. She relished seeing hundreds of the same people in her precinct, in that endeavor, for all those years.
Preceding Elaine in death, besides her parents, in 1972 and 1989, were her son, Stephen in 1986 and her husband Russ in 1988. Her brother, Dr. Ed, also predeceased her. Her son-in-law, Johnny McKaig snd her son, Richard Headberg passed on in 2010 and 2011, respectively. And her brother-in-law, Dr. Leon Berube in 2012.
Elaine leaves two daughters to mourn her passing, Kay McKaig, along with Vickie Price and her husband Ken, all of Wichita. Her sister, Virginia Berube, of Mechanicsville, Maryland, and her dear sister-in-law, Rachel Wedman, of Tampa, Florida.
Elaine’s seven grandchildren are Jan Hunter, Enid, Oklahoma, Jyl Barker of Towanda, Kansas, Joni Gregory of Springfield, Missouri, John McKaig, Wichita, along with Michelle Valakos of Tampa, Florida, Sara Zermeno and Stephanie Bernard, both of Houston, Texas. She also leaves eleven great-grandchildren and sixteen great-great-grandchildren, four nephews and one niece.
To order memorial trees or send flowers to the family in memory of Elaine Lockwood, please visit our flower store.