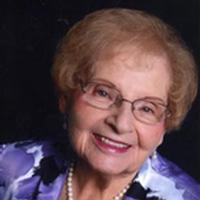 As a child Marjorie attended New Home and Star Valley country schools, and she graduated from La Cygne High School in the class of 1946. Following graduation she attended Ursuline Academy in Paola, KS where she earned her teaching certificate. She then taught one term at the one-room country Macedonia school in Linn County.

On March 22, 1947 she married Allen Tribby in the parsonage of the Central Christian Church, Kansas City, Kan. Together they raised two children, Deborah and Doug, and celebrated 66 years of marriage together prior to Allen’s passing in 2013.

Marjorie loved travelling, and she and Allen enjoyed taking country drives on Sundays and vacations to nearly all of the 50 states. Her last road trip was to Socorro, New Mexico in May 2013 to visit her granddaughter Sarah and husband Luke Schmidt.

Faith was an important part of Marjorie’s life. She was baptized into Christ in 1939, in the old original Christian Church in La Cygne along with eight other young people from the Star Valley community, one of whom was her future husband, Allen. An active church member and musician, she directed church choir and was often involved with special music.

Marjorie loved music, and studied piano under Mrs. Huffman in La Cygne. She played in many recitals, and enjoyed performing solos and ensembles for many church and community events. A lover of classical piano music, she particularly liked the works of Debussy.

As a charter member of Les Jeunes Femmes women’s club, Marjorie was very active in the Second District of the General Federation of Women’s Clubs, eventually becoming Second District President in 1992. She was a great supporter of the GFWC Music Scholarship Auditions, and devoted many hours to charitable work and giving. She particularly enjoyed sewing quilts for Operation Smile, and was proud of achieving her 50 year membership pin. She treasured the friendships that she made through GFWC and looked forward to attending conventions throughout the state of Kansas. A highlight for her was travelling with club friends to national conventions in Orlando, FL and Philadelphia, PA.

In January 1959 Marjorie started work as a switchboard operator at the People’s Mutual Telephone Co in La Cygne, KS, and was promoted over the years eventually becoming Bookkeeper in 1968, and working until her retirement in 1994. She was a dedicated and loyal employee, and was beloved by her coworkers.
Marjorie loved to keep in touch with friends and family. Whether she was talking on the phone or sending special cards and letters, it was so important to her to recognize every milestone and celebration for the people in her life. She maintained a separate calendar with everyone’s birthdays and anniversaries, and saved important mementos and newspaper announcements for all her loved ones.

In January 2015 Marjorie moved to Via Christi Village at Georgetown in Wichita, KS. She enjoyed the fellowship of the community there and made many new friends.

Marjorie loved, and was beloved by, all who knew her. She was preceded in death by her parents; and husband, Allen Tribby, and is survived by her children, Deborah (Allan) Shorthill and Doug Tribby; granddaughter, Sarah (Luke) Schmidt; and brother, Scott (Clara) Shaull. She is also mourned by many other cherished family members and friends.

The family will observe a private service together on Saturday October 15, followed by cremation.