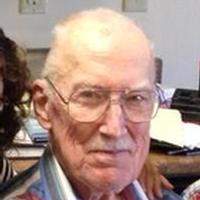 Claude W. Schmidt, MD, 92, passed away October 5, 2016. He was born August 29, 1924, to Alfred and Irmgard (Rubusch) Schmidt in Shawano County, Wis., where his father was a dairy farmer. Claude received his medical training from the University of Wisconsin, Northwestern University, and the University of Kansas. After serving as a Navy flight surgeon during the Korean War, Claude took care of “the better half of humanity” as an obstetrician/gynecologist in Waukesha, Wis. He retired to Los Alamos, N.M., in 1992 and moved to Wichita, Kan., in 2003 to be closer to his children. Claude loved the outdoors: he took up bird hunting “to entertain his black Lab” and skied until he moved to the flatlands at age 79. He crafted beautiful wooden cradles for his grandchildren. He loved a good joke, and he never knew a stranger. He was preceded in death by his parents; his beloved wife of 55 years, Ila Paulk Schmidt; and his brother, Ruben Schmidt. Claude is survived by his children, Greta (Christopher) Perleberg, Martha (Robert) Asaph, Karl (Norma) Schmidt, and Kurt (Laura) Schmidt; and 10 grandchildren. A memorial gathering will be held Saturday, November 5, from 2:00-4:00 p.m. at The Regent, 2050 N. Webb Rd., in Wichita. In lieu of flowers, memorial contributions may be made to the Sedgwick County Zoo, 5555 Zoo Blvd., Wichita, KS 67212.
To order memorial trees or send flowers to the family in memory of Claude W. Schmidt, please visit our flower store.