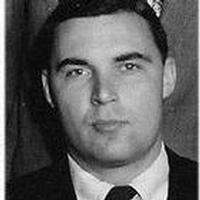 Ronald Richard McEnulty, age 85, beloved husband, Attorney and Air Force Officer, son of the late Alicia and John McEnulty of Tonganoxie, Kansas passed away peacefully December 10th, 2013 in Wichita, shortly after celebrating his 63rd wedding anniversary with his beloved wife Mary. He graduated the Valedictorian of his senior class from Wichita East and then joined the US Army during the occupation of Japan. He was a proud member of the elite 11th airborne paratroopers. After the war, he graduated from Wichita University. He married Mary Carolyn Corrigan of Wichita, his college sweetheart, and they had six children. Following his undergraduate studies at Wichita University, he received a Juris Doctorate from
Washburn University practicing law for more than half of a century in Wichita. Ronald was commissioned in the US Air Force Reserve where he served as a Judge Advocate General, retiring a Lieutenant Colonel after 27 years of service. He was co-founder of the Arthritis Association of Wichita.

A private ceremony and burial was held Friday, December 13, at Blessed Sacrament Church and Calvary Cemetery. A memorial has been established at the Lord's Diner. Watson Reflection Pointe, 3201 S. Webb handled services. Share memories at watsonfuneral.com
To order memorial trees or send flowers to the family in memory of Ronald Richard McEnulty, please visit our flower store.