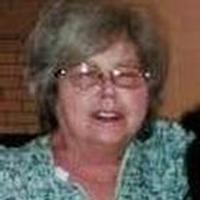 Rita Sherman, known as “Grandma Rita” to children everywhere, went to be with the Lord on June 18, 2013 in the home she shared with her daughter & son-in-law. Her children, sister & close family members were by her side.

Rita was born November 14, 1947, the second of four children to Harold and Lois Hendrickson in Garden City, Kansas.

She attended school in Montezuma, KS, Guymon, OK and in 1965 she graduated from Dodge City High School and went on to study at the Women’s College of the University of Denver.

She later married Richard Sherman. To this union, two children, Kimberly and Richard "Brandon" were born.

She was a member of The First United Methodist Church in Garden City, prior to moving to Wichita.

She was a telephone operator for AT&T for 25 years. Rita was always willing and able to help anyone and everyone. She decorated cakes, enjoyed crocheting & sewing. Every baby in her life has "Grandma Rita" blankets.

Rita was preceded in death by her parents and one sister, Linda.

Memorial services will be held on Saturday, June 29th, 2013, 2pm at Watson Reflection Pointe Funeral Home.
To order memorial trees or send flowers to the family in memory of Rita Sherman, please visit our flower store.