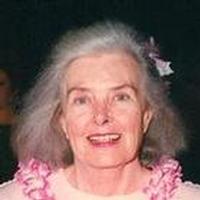 EILEEN “Gay” Vallis GLADDING
Eileen “Gay” Gertrude Vallis Gladding, 90, passed away peacefully in her sleep on April 1, 2013 at Hope Senior Center, Wichita, Kansas. Eileen also known as “Gay”, a nickname given her for vibrant personality and positive attitude, was born in London, England on September 3, 1922. During her early school years, Gay attended Brixton Central School in London and graduated as “Head Prefect” (valedictorian) of her class. While Gay won many academic awards in high school, she also was a champion high jumper and basketball player. At the age of 17, when the Germans starting bombing her beloved home town of London at the onset of World War II, Gay volunteered to deliver messages by motorcycle between London and British troops in the British countryside. Gay later joined the Auxiliary Territorial Service (Women’s Army Corps) and served honorably in intelligence as a “Morse Code Intercept Operator” in the unit that tracked and located the Spanish Nazis that led to their defeat. During the war, Gay met Edward Gladding, an American pilot for the Canadian Royal Air Force (RAF) and they married July 20, 1945. Shortly after the birth of their first son in 1946, the family moved to the US, settling on a farm in rural Virgil, New York. For 8 years, Gay and Ed managed and operated a poultry farm, sold chickens, eggs, and vegetables to support the family. During that time, Gay entertained family and friends by playing the piano. In 1954, the family traveled by car to California as Ed’s new career began with Chevron Chemical, Ortho Division settling first in San Francisco, then other cities in California, New York, Pennsylvania, Iowa, Kansas, Texas, and Arkansas and finally, settling in Wichita, Kansas in 1994. Gay held a variety of positions including “buyer” for a retail clothing store, assistant in an art restoration studio, personnel management consultant and photography assistant. After retirement, Gay traveled with Ed extensively in the US, Europe and Asia with family members. Gay was known for her English accent, gracious manner, and for her kindness to all things living. She was an excellent cook and gardener, loved travelling, learning how to be an expert camper and camp cook as the family visited major National Parks throughout the U.S. Gay was very well read, appreciated the ballet, classical music, and art, and shared her interests with her family as they visited museums and concerts together in cities around the world including London, Paris, Amsterdam, New York, Chicago, San Francisco, Hong Kong, Tokyo, and Singapore. Most of all, “Gay” loved her family and spent many hours supporting and encouraging them in all their various endeavors. Eileen “Gay” Vallis Gladding was preceded in death by her beloved Edward in 2007 after 62 years of marriage, her loving sister Doreen in 2010, and her adoring parents Graham and Mabel Vallis. She is survived by her children: Ian Gladding (Sheila), New Lenox IL; David Gladding (Linda), Wichita KS; Geoffrey Gladding (Maria), St. Charles, MO; Julia Sheaffer (Craig) Keller, TX; Diana Falke (Jerry), Clearwater, KS; and Heather Gladding, Fort Madison, IA; nine grandchildren: Erin, Tyler, Ben, Abe, Anne, Adam, Alison, Grace, and Clare, and, one great grandson, Graham. The family would like to thank the nurses, staff, and doctors at Hope Senior Center in Wichita, Kansas for all the loving care that helped make Gay’s final years so very pleasant and happy. Gay was cremated and a memorial service held at Watson’s Mortuary in Wichita with family and friends, April 4. Memorial contributions can be made to the “Edward Northrup and Eileen Gay Gladding Endowed Scholarship” at Lewis University http://lewisu.edu c/o Institutional Advancement, Lewis University, Romeoville, IL 60446 OR to Dr. Ian V. Gladding, Box 435, College of Business, Lewis University, Romeoville, Illinois, 60446 OR online at https://www.alumni.lewisu.edu/GiveNow
To order memorial trees or send flowers to the family in memory of Eileen Gay Gladding, please visit our flower store.