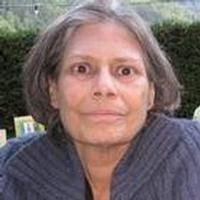 The Blatti family is sad to announce the passing of Michele (Mikki) Ann Blatti on 30 December 2012 in Kansas.

Mikki was born in Beaumont, Texas on 2 September 1950 to William H. Blatti and Vivian Peterson Blatti. As a result of her father’s military assignments in in various locations in the United States and overseas, Mikki had the advantage of being exposed to many different environments, including living in both Germany and Thailand.

Her attendance at the International School Bangkok, with her brother Mike, for both her Junior and Senior years (1967-68) very heavily shaped the rest of her life and career as she became a true International humanitarian. She attended college in Hawaii, and later completed both her Bachelors’ and Master’s Degrees from Wichita State University.

Shortly after her graduation in 1968 from ISB and her initial return to the United States, she returned to Thailand and Laos within two years. She became heavily involved in humanitarian assistance, refugee and refugee resettlement programs. She spent a large portion of her life in Asia and South Asia working with Cambodian refugee programs in Eastern Thailand and later with the Red Crescent refugee programs in Malaysia. She transitioned later to the American and International Committee of the Red Cross (ICRC) organizations serving as the head of the American Red Cross delegation in Cambodia concentrating on refugee programs, demining programs and mine victim rehabilitation. As an American Red Cross delegate, she also served as a field delegate for the International Red Cross mission in Sri Lanka during the Civil War and later was based with the ICRC mission based out of South Africa with responsibility for refugee, corruption and war crimes issues in Southern Africa.

After 2000, she transitioned to working directly for the International Committee the Red Cross (ICRC) at both headquarters and field delegate serving in Sarajevo, Bosnia-Herzegovina, at the ICRC headquarters in Geneva and, most recently, with the ICRC delegation in Tiblisi, Georgia with responsibilities throughout the region.

Mikki is survived by her brother Michael Blatti and his wife Sandra and her sisters, Sheila Whiston-Fox and Jo Blatti as well as three nephews and nieces: Michael W. Blatti, Anna Blatti and NicoleVancuren and her husband Chad and two Grandnieces: Amiya Blatti and Britton Vancuren.

Funeral Services will be held at: Good Shepherd Episcopal Church, 8021 W. 21st Street, Wichita, KS on Friday, January 4 at 10:00 a.m. In lieu of flowers the family asks that donations be made to the International Committee of the Red Cross.
To order memorial trees or send flowers to the family in memory of Michele Blatti, please visit our flower store.