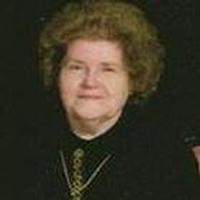 Luella “Claudene” Wilson passed away Saturday August 18, 2012 at Harry Hynes Hospice in Wichita Kansas after a long fought battle with breast cancer. A Celebration of Life open house will be held on Sept. 22, 1:00 - 3:00 at the United Methodist Church, 802 Indiana, Neodesha, KS. Claudene was born December 12, 1931 in New Albany, Kansas to Claude Edward Nelson and Edith Luella Harrington. Through her childhood her family made their home in numerous towns in southeast Kansas, but settled in Altoona, Kansas where she graduated from high school in 1948.

On December 12, 1950 she was united in marriage to Allen Dale Wilson in Bentonville, Arkansas. While her husband served in the Air Force and was deployed oversees in the Korean and Vietnam conflicts Claudene made her home in Neodesha, Kansas. Dale and Claudene had 5 children and are survived by four of their children. After her husband passed in 1975 Claudene moved back to Neodesha and made her home there until 1983 and at that time moved to Mulvane, Kansas where she lived until her death.

While living in Neodesha Claudene worked for Porter Drug Store, Neodesha School District and Golden Keys Nursing Home. In 1981 Claudene completed her Associate’s of Nursing degree at Labette Community College and became a Licensed Practical Nurse. When she moved to Mulvane, Claudene worked for Rose Hill Nursing Center until her retirement in 2001. From that point on Claudene spent her time reading, watching football (actually any sport) and spoiling her grandchildren.

Claudene is survived by her son; Allen Dale Wilson, Jr and his wife Sandi of Kansas City, KS; a daughter Annita Lou Wilson-Olive of Mulvane, KS; Barbara Ann Wilson- Broughton and her husband Alan of Alamogordo, NM, and her daughter Yvonne C. Wilson-Redington and her husband Les of Tulsa, OK. Claudene has six grandchildren, Print Olive, Ty Olive, Allyson Wilson-Bowes, Matthew Wilson, Kenneth Broughton and Michael Broughton and eight great-grandchildren. She is also survived by three sisters and four brothers. She was preceded in death by her husband, her parents and step-father Joe Brown, one daughter, Janet Elaine Wilson, and a brother.

Cremation has taken place at Watson Funeral Home of Wichita. In lieu of flowers our family requests contributions to Harry Hynes Hospice of Wichita (313 S. Market, Wichita, KS 67202) who took exceptional care of our Mother in her final days with us. We would also like to thank Dr. Paven Reddy, the staff of the Cancer Center of Kansas, and all of her other providers who in the past four and a half years have treated our mother wonderfully.

She is at peace and is now with our dad. Thank you all for your thoughts and prayers.
To order memorial trees or send flowers to the family in memory of Luella C. Wilson, please visit our flower store.