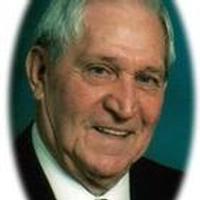 Ritchie, James Edward born July 16, 1930 in Rich Hill, MO., died April 1, 2011, in his
home at age 80. He is survived by his wife Karol, two children Karen (Ritchie) Ritter and Mark Ritchie, his daughter-in-law Leah Hardy, and his three grandchildren, Kathryn and Emily Ritter and Ky Hardy-Ritchie. James was a Veteran of the Navy following the Korean War. He met his wife Karol and they were married February 2, 1956. James worked at General Motors for 35 years. James and his wife, Karol, raised their two children in Olathe, KS. After retiring, the Ritchies’ moved to Wichita, KS, to be closer to family. They have lived in Wichita for 18 years. James is preceded by his father, Claude Ritchie, his mother, Elsie (King) Ritchie, and his brother Harold Ritchie.
Visitation with the family will be Sunday, April 3rd from 2:00-4:00 p.m. at Watson Funeral Home. There will be a grave-side service at the Deerfield Cemetery in Deerfield, MO. Services in Deerfield will be provided by Ferry Funeral Home, Neveda, MO Monday April 4th, at 2:00pm. Memorials to Victory in the Valley, 3755 E. Douglas Ave., Wichita, KS. 67218 and the American Cancer Society, High Plains Division, 818 Emporia Suite 100, Wichita, KS. 67214 are suggested in lieu of flowers.
To order memorial trees or send flowers to the family in memory of James Edward Ritchie, please visit our flower store.