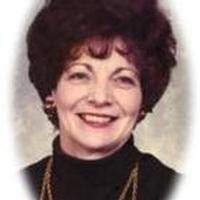 Allena Elizabeth “Beth” Harms, 88, died at home in Rose Hill, Kansas on January 5th 2011. She was born on February 17th, 1922 in Thomas, Oklahoma to Bertha Mae Caldwell Conkling and James Burton Conkling. She was the second youngest of nine children. Allena lived the majority of her younger years in Thomas, Oklahoma. Later she moved to Oklahoma City where she attended and graduated from Hills Business University of Oklahoma City. She was a secretary for many different Oil companies until obtaining a job working for Kerr McGee. She continued to work for Kerr McGee until retiring after 15 years of service. Allena was an active member in her church, The Church of the Brethren in Thomas and later St. Luke’s United Methodist in Oklahoma City until she moved to Rose Hill. Allena was very proud of her family. Two of her brothers died in service during the Second World War. She was also very proud of her children and grandchildren. She loved to garden and on any given day her neighbors could see her out in her yard tending to her flowers in a big pretty hat. She was always the bell of the ball.
Allena is survived by her daughter, Patricia Chambers, her son, Steve Lazell; her granddaughters, Sheena Taylor and husband, Sam Taylor, KayCee Wilson and husband, Walter Wilson; and many nieces, nephews and cousins.
Allena was preceded in death by her husband, John Harms; her parents, Bertha Mae and James Burton Conkling; her siblings, John Scott Conkling, Ernest Henry Conkling, who were highly decorated in World War II. Other siblings preceding her in death were Bernice Beatrice Conkling, Fred Ralph Conkling, Frank Arthur Conkling, Clarence Virgil Conkling, William Ray Conkling, and George James Conkling.
Services will be held on Monday January 10, 2011 at the First Christian Church, 217 N. 6th in Thomas, Oklahoma. Following services burial will be at The Mound Valley Cemetery in Thomas Oklahoma. Relatives and friends are welcome at the church before services for visiting.
Please send all Flowers to First Christian Church. Watson Funeral Home in Wichita, KS is in charge of arrangements.
To order memorial trees or send flowers to the family in memory of Allena E. Harms, please visit our flower store.